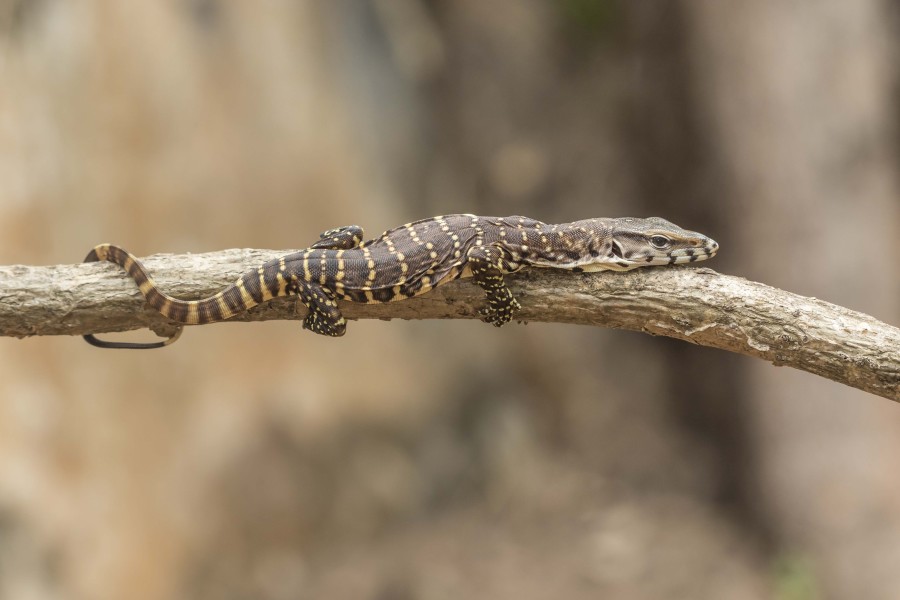 (Varanus bengalensis)
Maximum length: 1.7 meters.
With a velociraptor like face, predatory swagger for a walk, and a massive and powerful body as an adult, the monitor lizard makes for a creature that appears to have crawled straight out of the dinosaur age! Amazingly these large lizards still feed, live, and thrive in and around human habitations. I often encounter one that lives in a dilapidated old house bang opposite mine in Goa. This specimen is over a meter in length but extremely shy. In fact every time the big lizard sees me it dives headfirst into an unused well. The well is at least about six meters to the bottom and dry in the summer. But the monitor is apparently unaffected by the fall for it continues to repeat this seemingly suicidal tumble every single time I see it. During these days the well is shrouded in a thick post monsoon green cover so I don’t see the lizard anymore. But I know it’s definitely still there because I’m often treated to the sound of a loud splash when I walk past the well! Obviously this is the monitor landing belly first in the water.
A few days ago I spotted a 15 inch juvenile nimbly climbing up a coconut tree in my property! The specimen in the photograph is about seven inches long and was spotted by a friend of mine right outside my compound wall. On spotting us the little animal made a quick dash but, luckily for me, decided to hide under a rock close by. On capturing and examining the little animal I was surprised to notice that this juvenile had much more interesting patterns and colors to it than the drab brown patterns found on an adult. So I set up my camera and placed the monitor on a dry branch. I then continued holding the monitor gently for several seconds till it seemed like it would stay clinging to the branch unmoving for at least a bit. Then I slowly lifted my hand off the lizard and out of the way of my photo frame and started clicking away with my camera. Six shots later the monitor suddenly launched itself off the branch and in a split second, disappeared into a hole in the compound wall! Luckily for me I already had what I wanted!
Monitor lizards are diurnal animals but mostly forage around in the mornings and evenings. They have excellent eyesight and can apparently spot human movement from over 250 meters away. They also have an excellent sense of smell and their forked tongue which is protruded in the manner of snakes, helps them effectively hone in on food. Large claws and a strong bite render it a formidable predator with the adult monitor taking reptile and bird eggs, birds, arthropods, snails, frogs, skinks, insects, small turtles, snakes, fish, crabs, scorpions, and small mammals as prey! If live food isn’t always available monitors will readily feed on carrion too. Young monitor lizards mostly feed on insects.
When disturbed most monitors will make a dash for it with considerable speed. If there’s a tree at hand the monitor might scale it with considerable ease. Most escaping monitors however will usually find a burrow or crevice to dive into. Wedged into a burrow an adult monitor is almost impossible to dislodge since the lizard inflates its body by filling its lungs with air and locks its claws on to the inside of the burrow with a vice like grip. So the legends of monitor lizards with ropes tied to their waists being used to scale high walls might very well be true since wedged in securely in this manner an adult monitor could easily hold on to the weight of a climbing human for a fair bit of time.
Monitor lizards are excellent swimmers and can hold their breath under water for several minutes. During periods of food scarcity they can live off fat reserves or go through periods of reduced metabolic activity for months at a time. Females are able to store sperm and specimens in confinement have therefore been known to lay fertile eggs despite not having mated with a male for a while. Most females will lay about 20 eggs which strangely often take a long 8-9 months to hatch!
Monitor lizards were once prized catches in Goa. The belly skin of the monitor was used to make the drum head for a local percussion instrument. Thousands of monitors were slaughtered for this purpose. Many are killed for extracting their body fat which is used in folk remedies. Despite being protected by the law now these cruel and illegal practices still continue in villages of India.
From the myriad abilities of the monitor lizard it is obvious that this creature has been an evolutionary success: fossil forms similar to existing species were present over 50 million years ago! It will be a crying shame if and when they do go extinct that they do so at the hands of merciless, insentient, and misguided human beings. 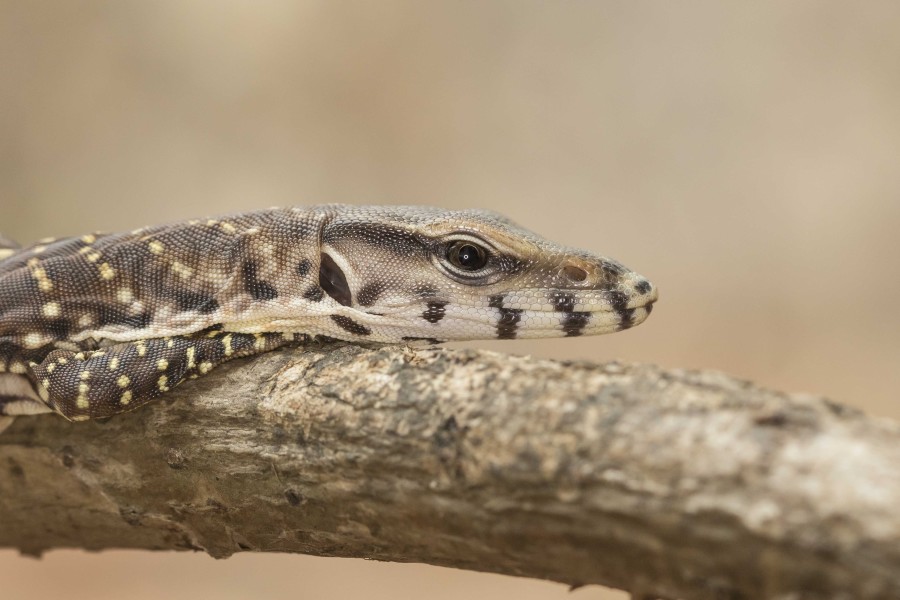