Click on the pics to load them in higher resolution 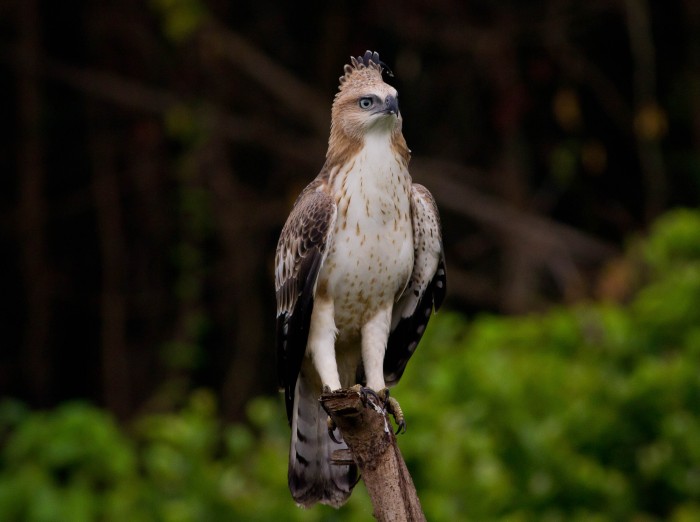 Around the first week of June 2012 I decided to take a few days to find a Crested hawk-eagle that I’d been hearing sometimes at Socorro plateau and try and get atleast one decent shot of it. My first four trips got me only a few useless shots from a distance. But from the photographs I was able to the pale colors of the bird as those belonging to an immature eagle.
I had also by now figured out that the bird often spent time in a field surrouded by forests at the foothills of Socorro plateau. The field seemed to serve as a sort of a creche for this youngster while its parents were out hunting. 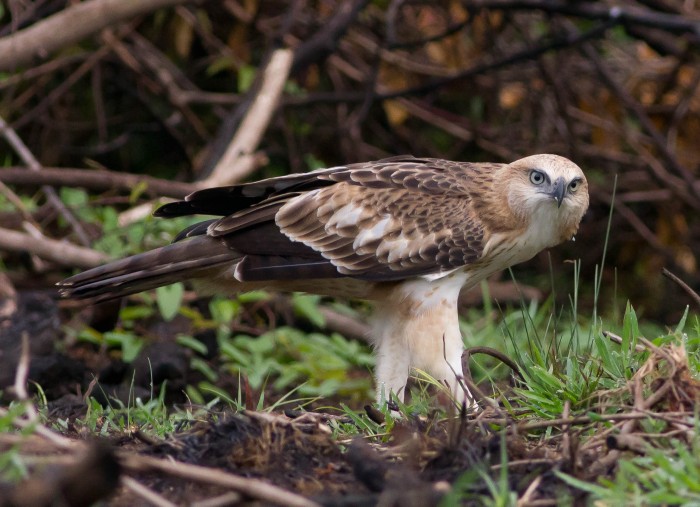 On my fifth trip, when I got to the field it didn’t take me long to find the young raptor. He was on the other side of the field and calling his (or her!) head off. He also seemed to be making some practice flight runs every once in a while. Being about sixty meters away from me I knew I had no chance of getting a decent shot. I had to get much closer. But if I moved too quickly he was certain to fly away. I decided to watch him from a distance for a bit so he could get used to me.
As I watched him I realized that he had no plan at all and was just goofing around as he explored the field! At one point I noticed him cocking his head with surprise at the ground four meters away from him. When I moved my binoculars to the spot he was looking at I was just as surprised to see a large monitor lizard slowly moving into the undergrowth!
Eventually the monitor disappeared and eagle moved behind some logs of wood. He was now out of sight. This also meant that I was out of his sight and spotting the opportunity I decided to move in on him. By the time he moved back into sight I was less than thirty meters away from him. 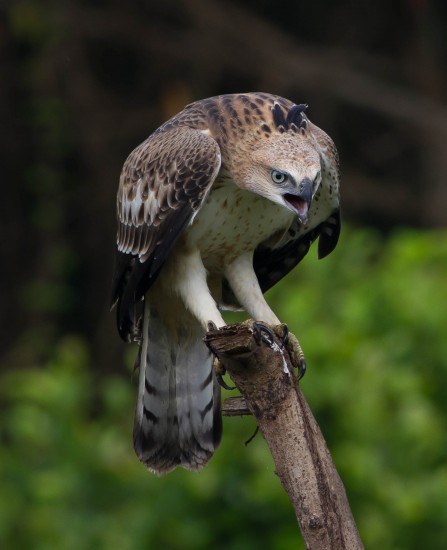 I was also now no longer walking but crawling on all fours towards the bird. I moved now at a speed of three to four meters every two minutes and took a couple of shots every time I paused. At times the big bird would cock his head in my direction but he seemed to be unperturbed by my presence. Eventually I got to within twelve meters of the bird and I settled down realizing that moving any closer might end up scaring him away. But the eagle was going nowhere and infact was giving me some of his best poses! 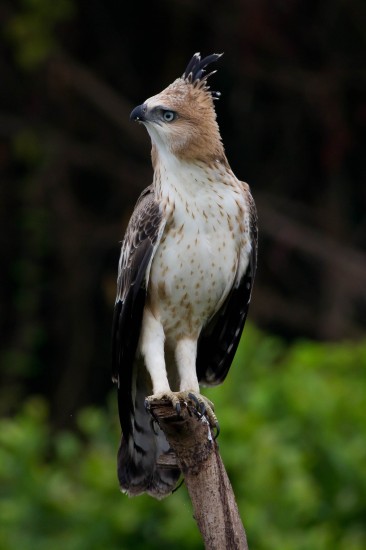 About five minutes later the young bird cocked his head up at the sky excitedly and I noticed a large dark shape sweep across the sky. It was one of the parents! The large bird flew straight into a tall bare tree and sat watching us from a distance. The young eagle called constantly now but the adult had no intention of coming down.
But then just when things didn’t seem like they could get better the young eagle jumped onto a stump of wood seven meters in front of me. The bird was now in full view and giving me the most fantastic poses. I clicked away merrily and about four or five minutes later the bird took off in the direction of the forest screaming his head off! 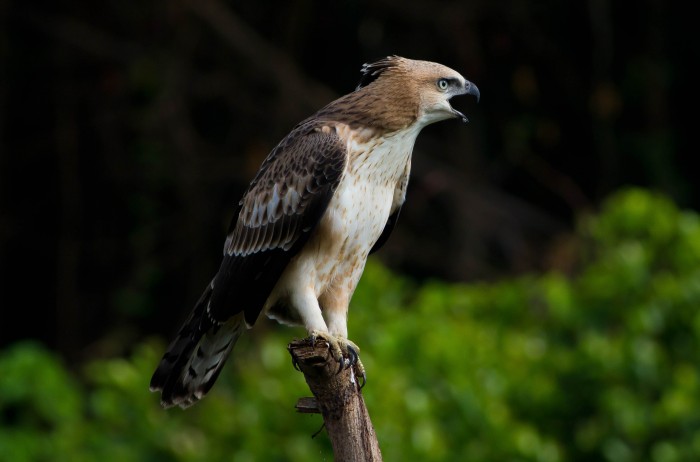 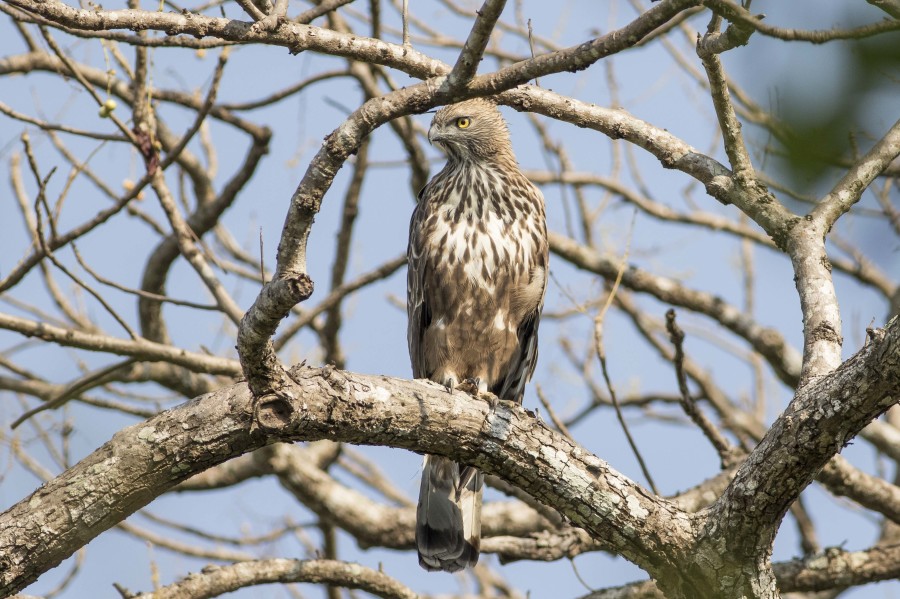 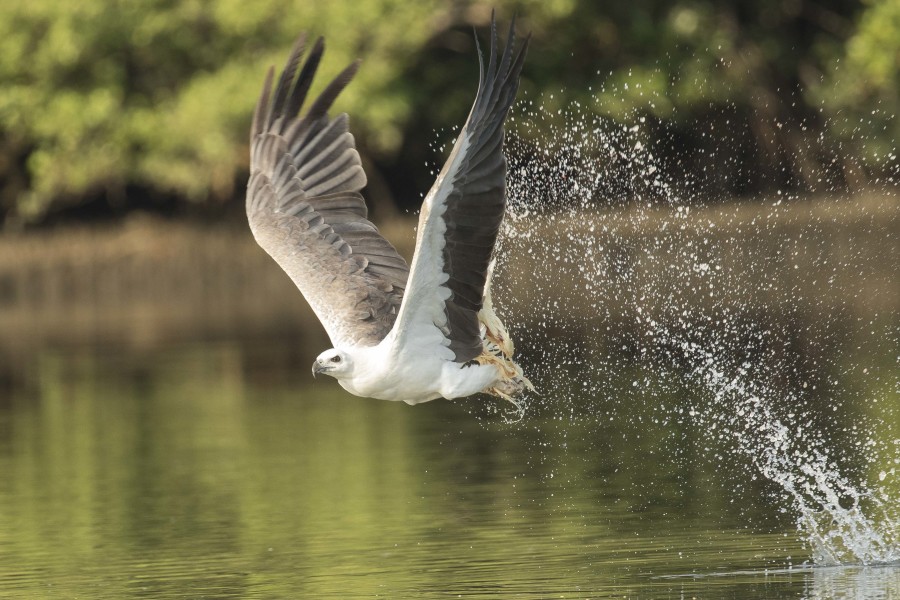 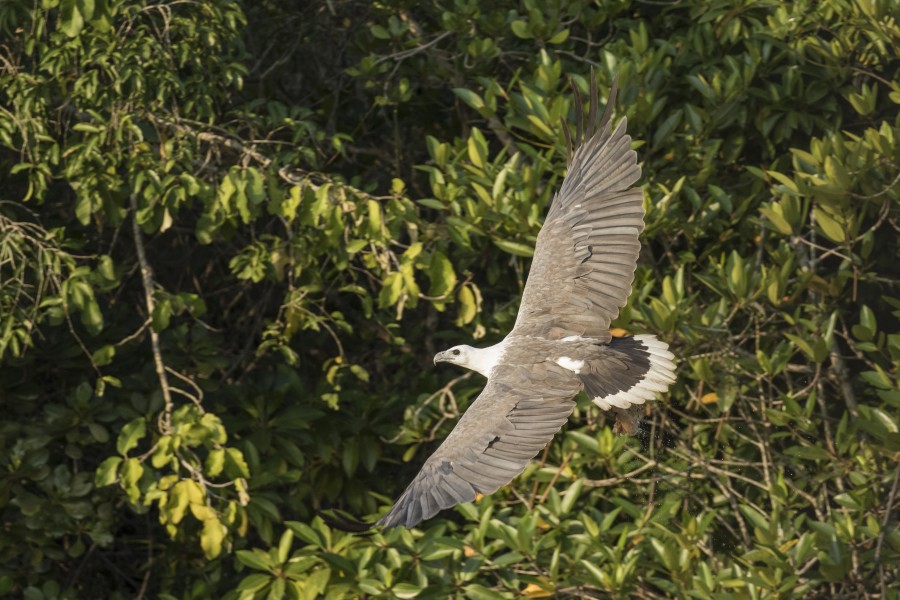 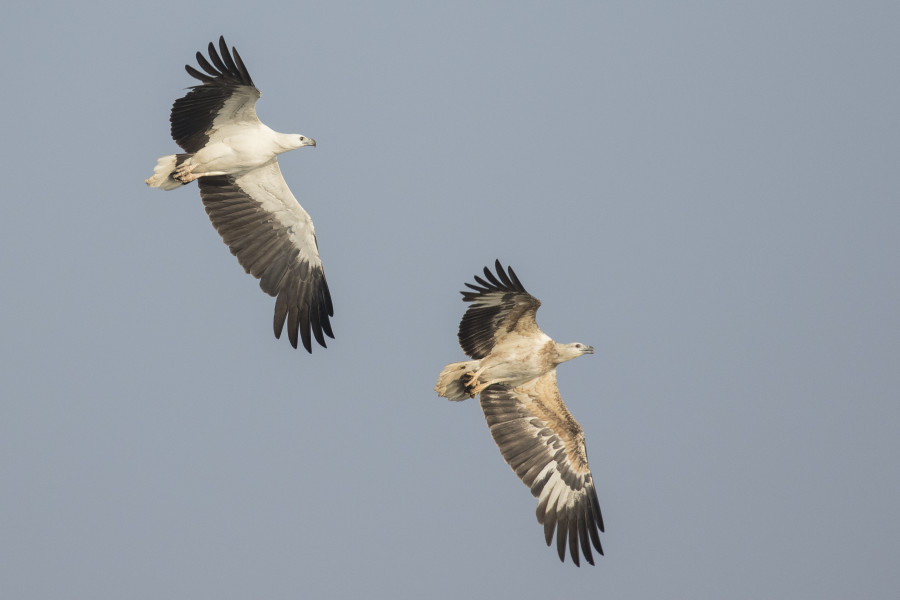 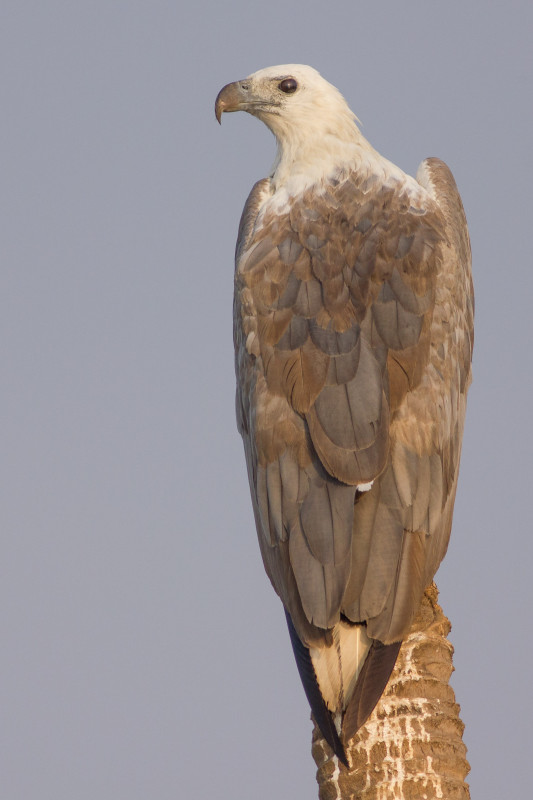 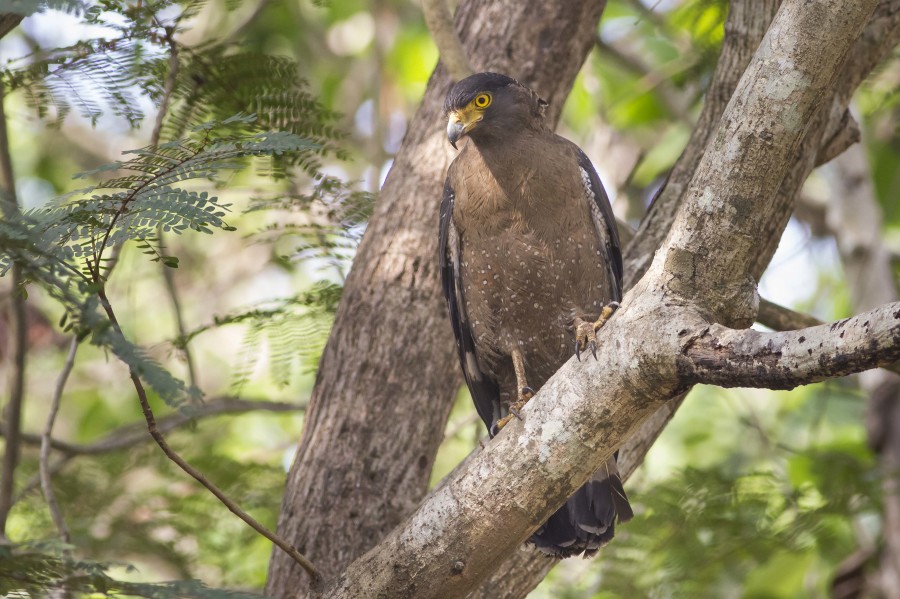 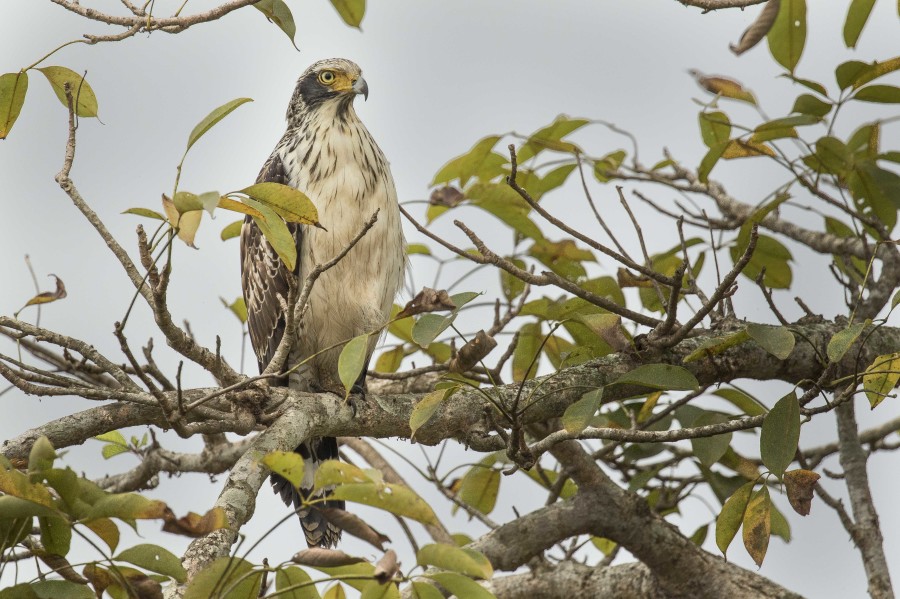 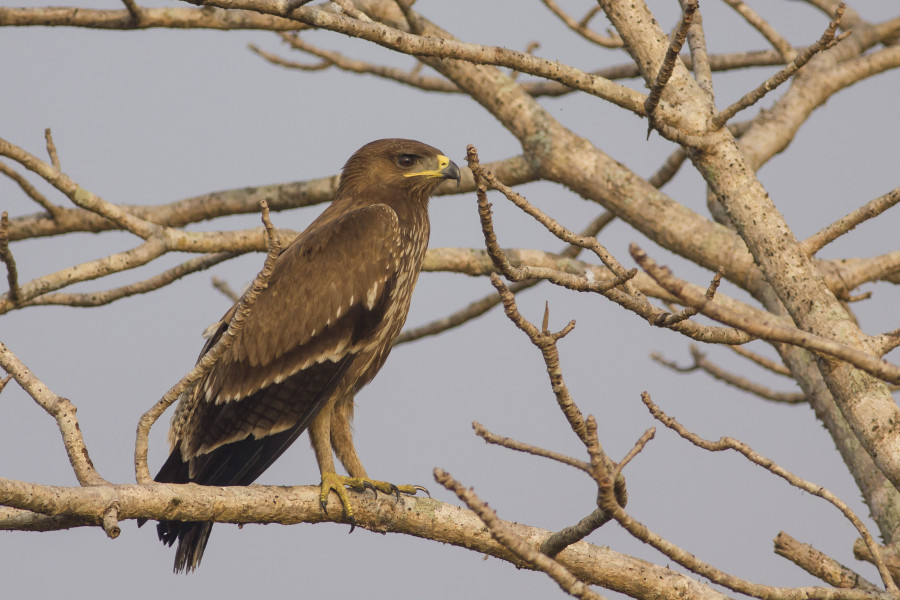