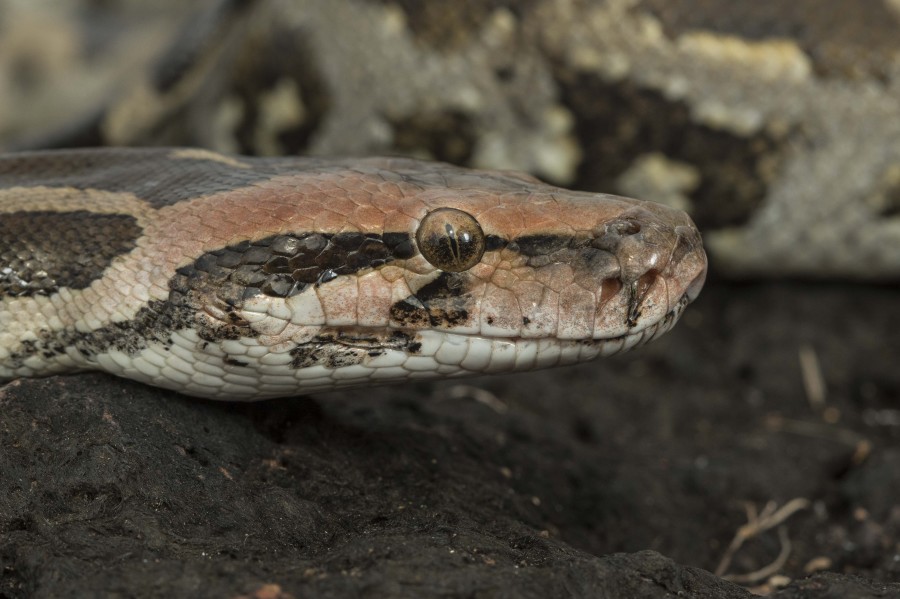 The Indian Rock python I’m called to rescue is usually guilty of entering chicken coups and swallowing our egg machines. Bigger ones will take larger animals – I was once called to capture one that had attempted swallowing a kid (baby goat really!)

Really huge pythons take still bigger animals – a friend of mine captured one that had tackled a fully grown goat, and another that had killed an adult monkey up in the trees. Analysis of stomach contents of these huge snakes reveal a bizarre diet; frogs, toads, monitor lizards, birds, rodents, fruit bats, jackals, civets, deer, wild boar, hare, porcupine and langur. Some have even been known to take leopards!

Yet they really pose no threat to humans. In fact, they rid us of a great deal of pests such as rats and bandicoots. 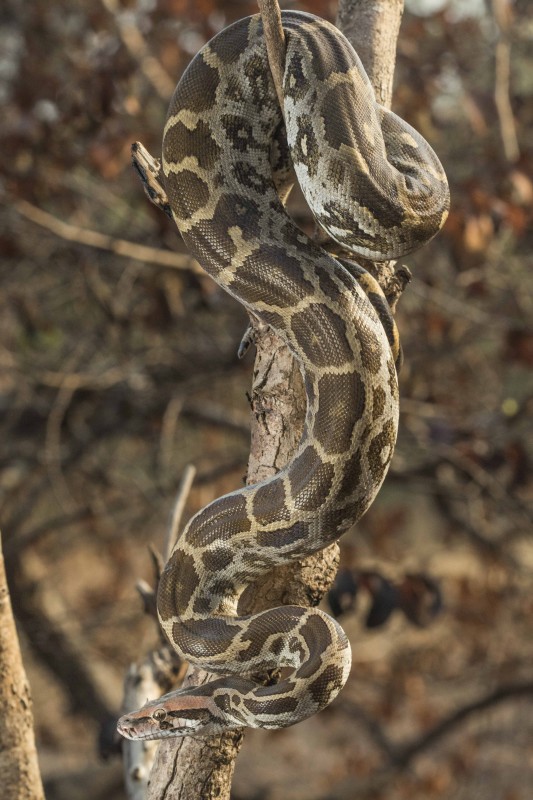 Pythons are not very fast movers and they must therefore get very close to their prey if they are to catch it. Heat sensitive pits located on upper lip scales help them locate warm blooded prey in pitch darkness.

They also have an unusual style of locomotion which helps them stalk prey without giving their own position away. This method of movement is called rectilinear movement and looks very similar to the movements of a millipede (except of course that pythons unlike millipedes are lacking in legs). The snake produces waves of contraction which pass along the length of its body helping it propel forward without needing anchorage at the sides of its body. 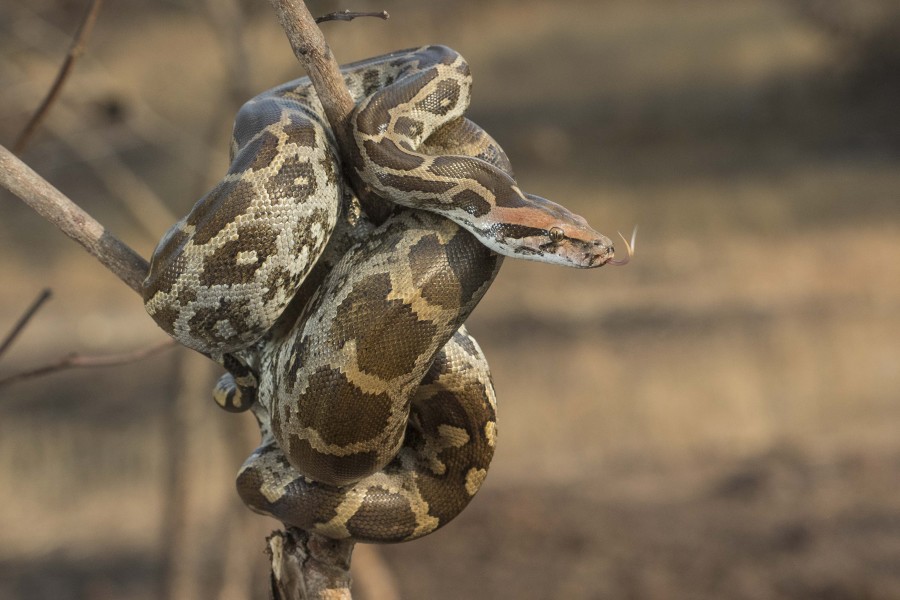 When stalking prey they can move very slowly. In fact you only notice that the snake has moved if you close your eyes or look away for a few seconds. The mottled design on the snake’s body breaks the body outline of the snake hiding it efficiently on the ground or in dry leaves. The camouflage of the snake is completed by two commando stripes drawn along the face (one of them runs right through the eye!)

Once this constrictor gets close enough to its prey it will strike with lightning speed.  The snake grabs it by biting it and in the same instant loops two to three coils around its victim’s struggling body. Once the coils are secure the snake may move its own vulnerable head away till the animal suffocates and dies. The entire process of biting the prey, anchoring the coils and moving the head away finishes in milliseconds leaving most people with the impression that pythons cannon bite and are only capable of coiling around their prey.

Prey such as chickens and rats take only a few minutes to suffocate. Once the snake is sure that the animal is dead, it releases its coils and starts sniffing around with its tongue to locate its victim’s head. Imagine being able to tell the head of an animal from its body just by its smell! Prey is always swallowed head first and while still warm (dead animals harden and become difficult for a snake to swallow when they go cold).

I have watched pythons stalk, capture, suffocate and then swallow massive bandicoots. What’s never fails to amaze me is how pythons can swallow animals at least three to four times the size of their own head.  Skin stretches, jaws separate and joints dislocate until halfway down swallowing the meal the snake’s head resembles more a vacuum cleaner bag than the reptile head it’s supposed to look like! Four to five days later the only trace of the bandicoot is a small clump of hair in the snake’s excreta!